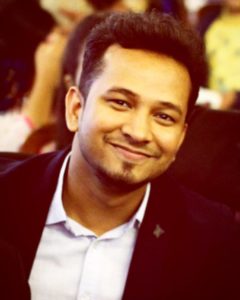 Department of English Language and Literature

·       Achieved Certificate of Appreciation in ‘The Urban Experience: Printmaking and Poetry Workshops’ jointly organized by Bengal Foundation and the American Center of the U.S. Embassy in Dhaka, conducted by Whitney Baker, in 2014

·        Achieved Certificate of Appreciation in the ‘Creative Writing and Performance Literature Workshop’ conducted by Brine Pickles under the aegis of the American Center, U.S. Embassy, Dhaka, Bangladesh, in 2013.

·     Achieved Certificate of Appreciation in the ‘Workshop on Poetry’ conducted by Tom Warner, organized by Brine Pickles and British Council, Dhaka, Bangladesh, in 2011.

·        “To Look Back Is to Suffer: The Lost ‘Masculinity’ of Esthappen in The God of Small Things and the Loss of a Conforming Childhood Memory of the Contemporary Young Men in Bangladesh”.  Crossings, ULAB, Dhaka, December, 2015.

·        “The Language of ‘the God of Big Things’ and the Post-colonial Struggle for Its Ownership: An Analysis of the Elasticity of English in Arundhati Roy’s The God of Small Things”. Journal of nazrul varsity December, 2015.